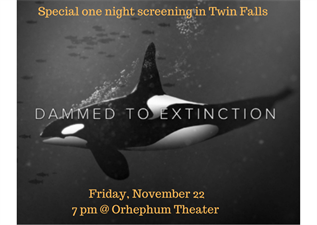 Special one night screening of "Dammed to Exctinction" @ the Orpheum Theater

Special one night screening of "Damme...

Join us at the Orpheum Theater in Twin Falls on Friday, November 22nd for a special one-night-only film screening of “Dammed to Extinction”.

Why: Learn about the plight of Idaho’s salmon and what must be done in order to save salmon and Puget Sound Orca from extinction.

Tickets are $10 and will be sold at the door as well as the week beforehand on the Orpheum Theater online ticket office here. Proceeds from the event will benefit the Idaho Sierra Club's salmon restoration work.

About the film: For eons, a one-of-a-kind population of killer whales has hunted chinook salmon along the Pacific Coast of the United States. For the last 40 years, renowned whale scientist Ken Balcomb has closely observed them. He’s familiar with a deadly pattern — as salmon numbers plummet, orcas starve.

The orcas need roughly a million salmon a year. Where to find a million fish? The solution, says Balcomb, is getting rid of four fish-killing dams 500 miles away on the largest tributary to what once was the largest chinook-producing river on Earth.

Following the 52 minute film there will be a short presentation on how folks can help make a difference as well as an opportunity for audience members to weigh in and ask questions.